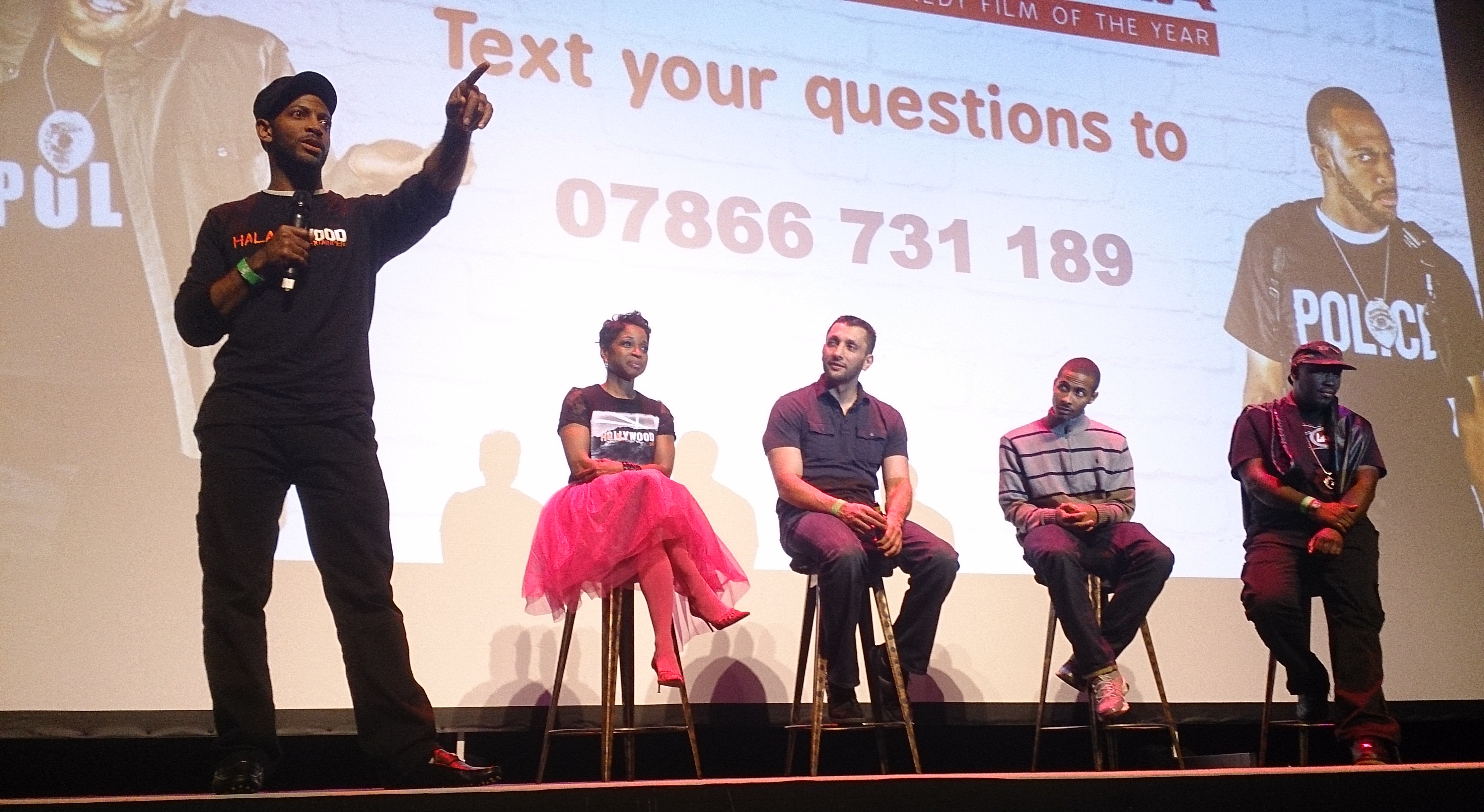 Wednesday 11th February 2015. I was at the Hackney Empire in London to attend the UK premiere of American Sharia, a Muslim comedy film by director, writer, comedian and actor Omar Regan. Talk about being multi-talented!

I arrived early and was one of the first people in the queue by the front door. As time passed, the line grew larger and larger and I could feel genuine excitement. This was my first appearance at any kind of premiere, so it was quite a unique experience and certainly a memorable one. British Muslim TV suddenly emerged, equipped with their broadcast cameras and reporters holding microphones as they approached members of the lively crowd. They asked me to pull a silly face for their cameras… not sure how that one turned out?

One of the photographers assigned me the honorable, prestigious but temporary title of… poster boy. It was fun while it lasted, for an amazing eleven seconds or something like that. Look at the sheer enjoyment on my face as I hold a colourful sheet of paper for the cameras.

After waiting patiently outside for about an hour, the doors finally opened and everyone slowly filtered through and into the theatre. The event kicked off with beautiful recitation from the Qur’an, followed by some hilarious standup comedy from Omar Regan and and a passionate fundraising appeal led by Ajmal Masroor. Once the fundraising had finished, the film was shown at 8:30pm, almost two hours later than the time stated on my ticket!

American Sharia finished at 10:00pm and then we had the opportunity to throw questions at key members of the cast, as well as the film’s producer Couni Young, for about half an hour. By 10:30pm, the event was drawn to a close and before heading back home to Cambridge, I took photos with Omar Regan and Baba Ali!

I also had a nice chat with Couni Young about the film, who appeared to express willingness and interest in helping to produce more features in this industry.

Overall, I left with mixed emotions. I was disappointed and frustrated with certain aspects of the event. The time management was so poor and this is a recurring theme in so many events I go to, especially Asian weddings and other fundraising dinners. I was expecting to leave at 9:00pm, hoping the event would finish by then but I didn’t get home until 12:30am! Having seen young children queuing up outside with their families from 5:30pm and then for the film to finish at 10:00pm, this showed the event organisers’ incompetence and lack of consideration towards youngsters who had school the next day and would probably sleep early. There were many people who had work in the morning – myself included. Travelling to and from the venue was not exactly straightforward, hence why I tried to allocate more than enough time to my journey so I could be punctual.

Penny Appeal, the charity organisation who are coordinating the UK tour and presenting the movie, emailed me plenty of reminders to arrive early. Here are examples of what they said. The first one is their email subject.

“Make sure to arrive on time. If you arrive after 6.30pm you will not be allowed in”

As you can see, different times were stated in the two emails I received – 5:30pm and 6:30pm. There was no time stated in any of the emails for when the film would start, except for the ticket I received on the day which said 6:45pm. I expected the film to start at this time. The emails did not specify a time for when the fundraising would take place and how long this would take. With the screening of the film being delayed even further and the audience having no idea of when it would be shown, this led to members of the crowd becoming increasingly agitated and disgruntled. Of course, I will always support fundraising for good causes and I am sure many people would do the same, but this should be appropriately planned and carried out in an effective manner. Set a time and stick to it. Some people sitting in front of me were clearly unhappy and left during the film, affecting my view in the process.

This is the first time I have published a critical response to an event I have attended, but I really feel it is necessary that people are aware of this because it is simply unacceptable. Timekeeping is a serious problem and is something that has to be addressed, especially within Asian communities. It is seriously damaging and leads to a breakdown in trust, which becomes increasingly difficult to claim back if these habits continue to persist.

So what did I get for arriving early? Leaving late. All in all, an entertaining but frustrating evening.